So, you wanna buy a nice Collector’s Edition? I can get it for you retail.

Thanks, I’m here all week. The veal is on special.

Imagine you get to work with Robb Waters, the concept artist who visualized the cover of System Shock. The Trickster in Thief. Man-Bot in Freedom Force. BioShock’s Little Sisters. Sander Cohen. And BioShock Infinite’s Songbird.

Now imagine you can get him to personally conceive and oversee the production of the coolest statue in the world.

Then imagine we put that huge sucker in a period-style box, with custom artwork by Robb and Irrational concept artist Jorge Lacera. And that box went IN the collector’s edition box so you could leave that guy unpunched in his original packaging while you tear happily into the rest of the goodies. 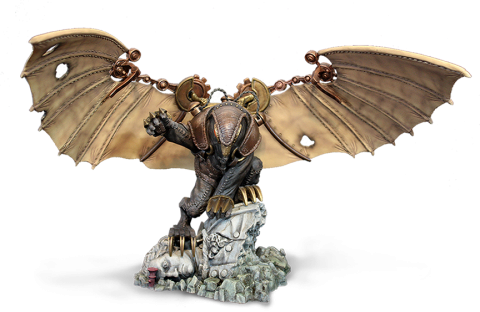 That monster is what’s in the Ultimate Songbird Edition of BioShock Infinite. But if your sugar daddy won’t pony up for the whole megillah, there’s also the Premium Edition, which includes a giant pile of swag:

Of course, all of the above is also included in the Ultimate Songbird Edition. And for the true nerds in the audience, the Songbird statue, the Murder of Crows keychain, and the Handyman all come in separate custom packaging.

Both Collector’s Editions will be available in limited quantities, so yadda yadda, sign your life away right now!

You owe it to yourself (and to poor, sad Ken Levine, who can always be spotted by his tiny crutch that sits forlornly by the Christmas dinner table) to check the thing out in this lovely display made by our amazing web team. I like it. My mother likes it. So it must be good.